The people of Derby are divided on the merits of a huge new apartment block that has been given the go-ahead.

It is expected to cost £30 million and to generate £68 million of economic benefits for the city while supporting 900 construction jobs.

The council’s planning committee decided to go against the recommendation of its planners in backing the construction of the 17-storey Landmark development, Business Live reports.

Now, Derbyshire Live readers have had their say about the approved plans for the giant block of flats.

Natalie Edwards said it was a “monstrosity” while James Stothard described it as “better looking than anything already in Derby”.

Kieran Porter said: “What an eyesore that is going to be, should never be in the city centre.”

Chris Hoben added: “It’s good news and will breathe life back into this area.”

Joe Perkins said: “I’m all for it. The city centre will only survive with leisure now more people shop online. Bars, restaurants, cafs, venues need footfall and this will provide it.”

It was the second time that the city council had given the scheme, which involves creating around 200 build-to-rent apartments, planning approval.

The local authority had previously granted permission a year ago. However, the proximity of the proposed 200-apartment building to the city’s World Heritage Site meant the Government referred the application to the UNESCO committee, which considers cultural World Heritage Site developments.

A series of technical reviews from ICOMOS, a cultural and heritage organisation acting as adviser to UNESCO, concluded the development “should not proceed”.

However, at last night’s meeting, the planning committee decided that Derby needed the economic boost The Landmark would give.

The developer behind the scheme, which will be built on land currently used as a car park in Phoenix Street, is multi-sector property developer Godwin Developments.

Stephen Pratt, group land director at Godwin, said: “We’re absolutely delighted that Derby City Council approved once again our proposals for The Landmark. It is a huge vote of confidence for the city and its ambition for the future.

“We are passionate promoters of Derby and its potential to reinvent itself through attracting additional employment and strengthening its city centre.

“The Landmark will be a fantastic extension to Derby’s Future High Street bid and will bring additional investment, jobs and desirable city living into the heart of Derby, while also improving the public realm and flood defences.

“We would like to thank the members of the planning committee for recognising and affirming once again the substantial economic, social and environmental benefits this scheme will bring to the city.

“We are also extremely grateful to the support and encouragement we received in the planning process by a number of local stakeholders – businesses, the local community, local heritage experts Lathams and many more.”

The Landmark will consist of a mix of one-and two-bedroom apartments and include a range of resident amenities such as a gym, concierge, lounge, guest suite and coffee area in addition to 47 car parking spaces and provision for 36 bicycles.

It will be aimed at a growing cohort of professionals and graduates in the area while supporting the wider Derby regeneration plans announced this week by the Derby Economic Recovery Task Force.

Among the organisations which make up the task force is Marketing Derby, which is the city’s inward investment agency.

Managing director John Forkin said: “Marketing Derby is delighted that councillors have voted to support the development of The Landmark in Derby.

“As an organisation, we have supported the developer and their plans every step of the way.

“Derby will now get the investment and profile it deserves with this ambitious and high-quality development.” 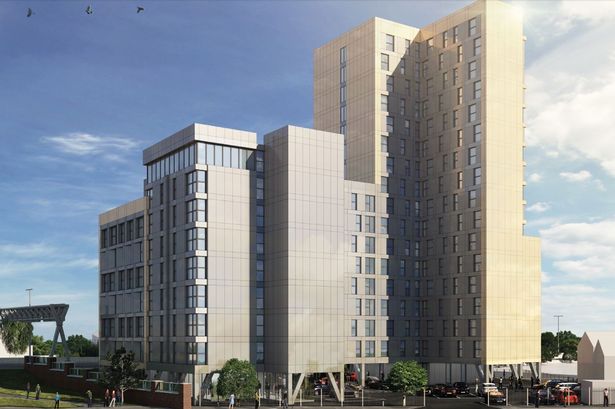