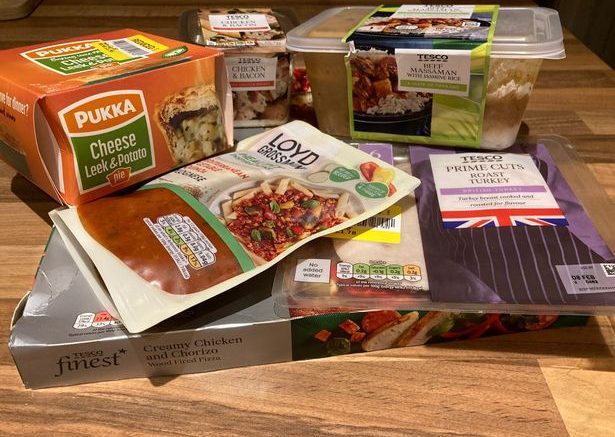 With food prices spiraling, people across the country are looking for cheaper ways to stick up their cupboards.

One of the quickest ways can be to head out and look for ‘yellow sticker’ bargains, the cut-price food supermarkets put out because expiry dates are close or the packaging has been damaged.

Most chains fill a shelf or fridge with cheaper food at the end of the day, while others may sell it at the start – but whatever the time you can usually pick up a range of food for oennies, if you are;t fussy about what you buy.

The food often needs to be eaten fairly quickly as it will be heading for its use by or best before date.

Reporter Gregory Ford with HullLive tried to live for a week on nothing but yellow sticker discounts, This is his story.

My first trip to the reduced section was on a Monday evening, this seems to be a good time for the yellow sticker hunters among us as the shelves were packed.

My first haul from Tesco was promising but I think I might have got carried away (Image: Hull Live)

I was conscious of the short dates so I went in with the intention to only buy items I could use immediately and things that I could safely store.

At Tesco we hit upon a beef massaman ready meal, a cheese, leek and potato pie, a creamy chicken and chorizo pizza, a bolognese sauce, some chicken and bacon sandwich filling, turkey slices and cheese slices.

There was no reduced bread which was a shame and the vegetable selection was sparse.

Pizza for tea then, not too shabby but still more expensive than anything I would normally buy.

I’d got carried away, day one and I was already up to £13 spent.

The rest of the week was marred with similar misadventures, in the hunt for the yellow sticker you’re very much at the mercy of a small selection of items.

I managed to pick up some reduced mixed veg, a reduced sliced bread and some bagged salad from Morrisons the day after my Tesco trip. But that was too late for my sandwich filling and breakfast for which I’d had to pilfer a couple of slices from my housemate.

That night’s tea was the massaman which was vaguely disappointing. The rest of the sandwich filling was used the next day but I was already getting worried about the turkey which had shot past it’s sell buy date.

I also gorged myself on the majority of a pack of spicy cocktail sausages I’d spotted on the reduced aisle that day, caught by the impulse of a bargain hunter and regretting my choices later on.

You know what you don’t see on the dry foods reduced section? Pasta. We’ve got a sauce and nothing to eat it with and we’re already a few days into this experiment.

I had a shameful tea where I used the bolognaise as a soup and ate it with a reduced bread roll I’d picked up on my way home.

Lunch was the dubious turkey on day four, smelt fine but my mind said I shouldn’t be eating it.

Dinner was the pie with veg which had been stored in the freezer and was the best thing I ate all week.

The turkey went in the bin on day five, moved on to the cheese slices which were fine but the salad I picked up was not.

Who needs enemies with friends like these? (Image: Hull Live)

For dinner that evening I asked a colleague to go to the reduced aisle at Marks and Spencer which is apparently where you can get some of the best deals.

They came back with a child’s portion of pasta, a chocolate mousse, a whole madeira cake and a prawn sandwich. Not exactly what I had in mind.

It was at this point that I lost my patience with the challenge, having thrown away half a bag of salad which had wilted to a mush.

So in the five (and a half) days I’d comfortably spent over £20 which is far above my usual spend, I’d thrown food away and I was worried about how healthy a lot of it was in the first place.

This experiment was extreme, no one lives on yellow sticker food alone and there is a place for the odd bargain in your weekly shop.

Realistically though, a lot of the food in those sections is pricey to begin with and store brand value products might still be cheaper.

You’re also at the mercy of selection and dates, there is no guarantee that there will be enough to put together the meals you need and even if there is it might spoil before you get to it.

Signing off with the image of a nearly 30-year-old man eating a third of a madeira cake for breakfast and considering his life choices on day six. Regret.

Located close to the South Derbyshire border, it is one of the biggest in Europe Derbyshire Live – What’s On …

Have a housewarming or outdoor dinner event coming up soon? Here’s a list of inspirational gift ideas to surprise your host Derbyshire Live – What’s On …

It closed for three weeks to undergo the £120,000 refurbishment Derbyshire Live – What’s On …

Derby is Fantastic for Families This Easter! Sat 9 April – Sun 24 Apr 2022 Venues and organisations in the Derby Family…