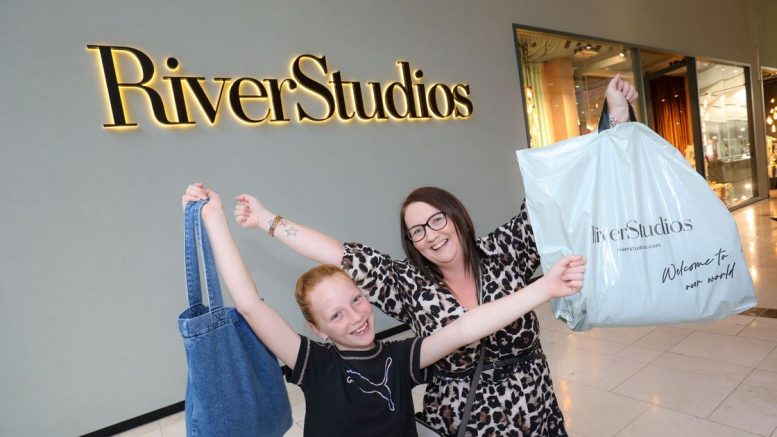 Customers queued up to be among the first to enter the UK’s first River Studios store which opened at Derbion today. The new concept store from River Island opened at Derby’s biggest shopping centre on Friday morning (August 26).

The city centre shopping centre has become the first one in the country to host the British high street retailer’s new store layout. The concept will next be rolled out to the fashion giant’s stores in Rushden Lakes, Northamptonshire, and Thurrock, in Essex, over the coming weeks.

The store welcomed its first customers at 11.30am, with the first 100 customers who spent £50+ in-store receiving goodie bags containing three beauty products, a River Studios magazine, a £50 voucher and Love Cocoa chocolate. Throughout the day, the store has been giving away tote bags to customers that spend £50+ in-store.

Read more: Get the latest Derbion stories from Derbyshire Live

Will Kernan, CEO of River Island, said: “This is an exciting step for River Island as a business, and marks the next stage of our continuing journey to elevate the River Island experience for our customers.

“Retail is at its best when it is evolving and adapting to best suit the needs of shoppers, and we are no different. River Studios delivers a modern, seamless experience fit for the high street of today.”

River Island’s old branch on Level 2 closed its doors for the final time on Friday, May 20 to allow for the relocation into a larger store. The big-name British fashion retailer is now based in a much bigger unit next to Mango on the same floor.

Spanning 11,000 square feet, the size of about four tennis courts, the new outlet is designed to offer a greater variety of fashion across womenswear, menswear and childrenswear. Adam Tamsett, centre director at Derbion, said: “We’re incredibly proud to be the first worldwide destination to become home to River Studios.

“The stylish space will be the first standalone store to showcase a brand-new look and feel, which will complement our strong fashion offer perfectly.” As well as other floor space at the shopping centre, River Island’s new store is taking up the unit occupied by sports and fitness shop Realbuzz until it closed down in May, 2019

In other Derbion news, two food court outlets are closing down this week amid a major revamp worth more than £2 million. The city shopping centre has confirmed Pasta 4 U and Rikshaw Urban Indian Kitchen will both be shutting by the end of this week.

Work is getting under way to transform the centre’s Level 2 eating area into a new “food terrace” which will see 150 more seats installed and an American fried chicken eatery open this autumn.

Construction work started earlier this summer to get the highly-anticipated new Frasers store ready to open before Christmas. The department store will be taking up the city shopping centre’s biggest unit previously occupied by Debenhams for more than a decade before it closed in May, last year, to the sadness of many shoppers.