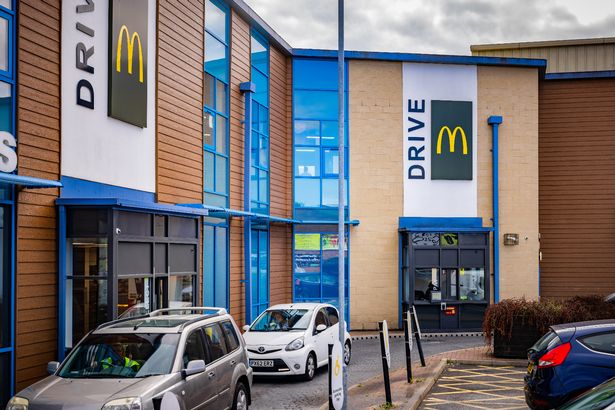 McDonald’s may be an American chain, but it’s certainly made its mark on British culture. Its breakfasts are lauded, it’s the archetypal post-night out food haunt and working there is a rite of passage into adulthood for many teens.

So it was a no-brainer when we were invited to have a look around the recently refurbished Rutland Street branch in Ilkeston. It reopened in July after a month of work to convert it into one of McDonald’s first new “Convenience of the Future” sites.

The new-style store, the likes of which McDonald’s hopes to roll out to most of its branches over the next four years, involves a host of new features. We got to go around the back, into the kitchens and to the order windows to see how things are run under the new changes.

First, I tried taking people’s drive-thru orders at the window. Under the watchful eye and with the helpful guidance of manager Julie, I donned a headset and got to work.

As the customer rolls up to the machine, I press a button on my headset and watch their window wind down on the CCTV. It’s true – the workers can see you while you’re ordering at the drive-thru. I won’t be making any grumpy faces from now on when they tell me they haven’t got any Fanta.

There are two different windows for the two different lanes, so we only get the orders that come through to our specific machine. The first question to ask is whether they’ve ordered on the app – one of McDonald’s newest additions.

If they have, their order will already be on our system and they go straight down to the collection window. Through using the app, they can also collect points and earn rewards by letting me scan their unique code at the window.

I have to listen carefully to their order as they speak down the crackly line.

After pressing a few buttons on an old-fashioned looking program via an LCD screen, the order is complete and the customer makes their way to the payment window. A grainy CCTV image appears on the screen and once I’ve checked that it matches the person who turns up, I store the order.

Then I ask how they want to pay, take the payment and send them down to collect.

McDonald’s employees aren’t just assigned to one area. They’ll be trained in a variety of tasks, meaning they could be in the kitchen, in the dining area or at the window all in the space of one shift.

Alternatively, they could be in the same spot all day. There’s only usually one person on the windows in one booth at any time. It provides the social aspect of speaking to customers and is less noisy and hectic than the kitchen, but there might not be any contact with colleagues for a while.

Now it’s time to get my hands dirty. I whack on an apron, wash my hands and a friendly staff member takes me through the steps to make a quarter pounder – my go-to choice.

The first step is to toast the bread. The top half is known as the ‘crown’ and the bottom half is the ‘heel’.

Then, using their purpose-made dispensers, one squirt each of mustard and ketchup is added to the crown. A pinch of onion and two gherkin slices are added on top of that before a slice of cheese is placed on each bun – two in total.

It surprised me how meticulously each burger is made. It’s not just slapdash. I was handily informed by another member of staff that the gherkin slices should be ‘slightly touching each other’ for the perfect burger.

Even more important is the cheese arrangement. While the cheese slapped on the crown is put on normally, the cheese on the heel has to be rotated 45 degrees to make it a diamond shape, offsetting the other slice and creating an eight-pointed cheese star clearly visible when looking at the burger from above.

With the patty, pre-cooked and seasoned by staff on the other side of the counter, added to the burger, it’s mission complete.

Easy once you get into the swing of it, but intricate nonetheless. Now there was one task remaining: the McFlurry. Yes, the ice cream machine was working. Another product requiring more intricacy than expected, the flurry starts with a pump on the machine to fill the cup. It swirls the ice cream automatically.

A couple of squirts of sauce and a handful of chocolate pieces – Mars in this case – complete stage one. Then comes the special ingredient – a six-second stir done by attaching the plastic spoon to a mechanic rotating arm (and that is why the spoon comes in such an odd shape).

It’s powerful, and vital to the process. One worker tells me they’ve got a phrase there: ‘if it’s made in a hurry, it’s not a McFlurry.’ Fold down the flaps and just like that, it’s done. And so is my shift.

It was an eye-opening experience to see how it works behind the scenes of an enterprise we’re all so familiar with. All the staff were friendly and helpful in showing me the ropes, and everything I saw and learnt has given me reason to order from there again with even more confidence than before.

A spruce up yes, but don’t change the Dolphin much